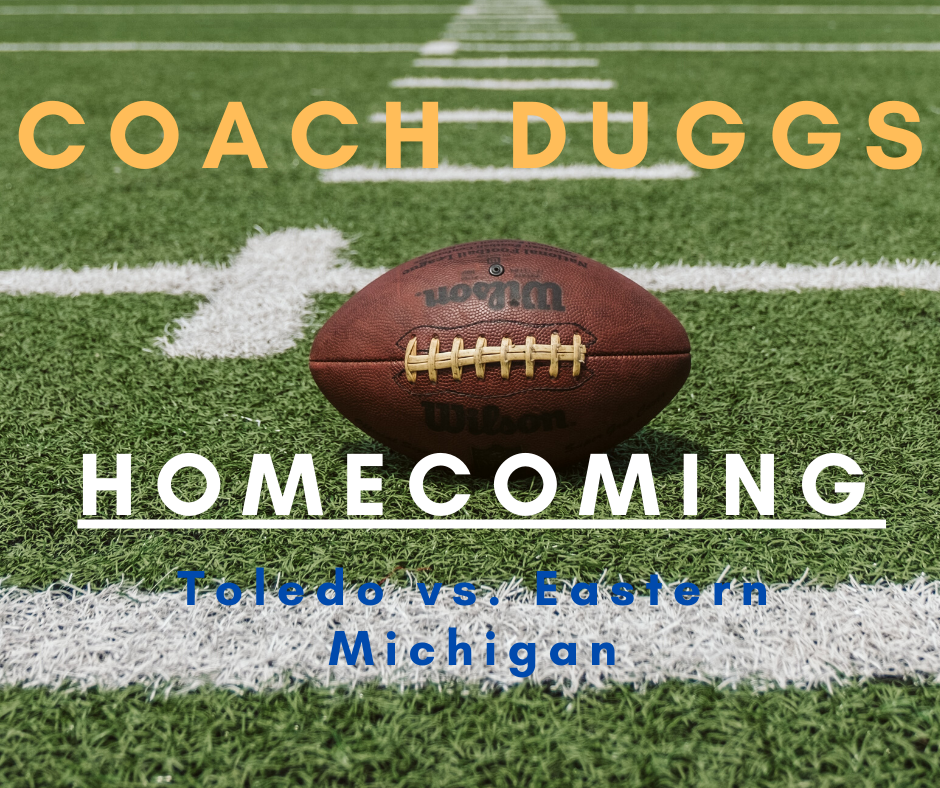 #2 Toledo took on unranked Eastern Michigan tonight in a bid to keep their perfect season intact.

It was a home game for Toledo and they were heavy favorites even though Central Michigan came into the game with a 7-2 record.

As usual Duggs started the game by calling on RB Bam Bam Calloway, QB Cade Shippley found him for an 18 yard reception.

Passes to WR Prince Fontana and WR Ken Moore kept the chains moving for Toledo on their first drive.

Bam Bam rushed for 10 yards, TE Bubba Butt got a 20 yard reception, and the Rockets were rolling.

Shippley found WR Sisqo Bey for an 8 yard reception, and Toledo were on the goal-line.

Shippley ran it in for a TD on the following play.

Absolute clinic on the first drive for Toledo.

A Robert Roberto sack forced Eastern Michigan into 3rd and 19 on their first drive.

Duggs was heard saying, “Air Duggs is back!”

A 15 yard reception in the flat from Bam Bam brought Toledo to a 1st and goal.

An 8 yard receiving TD from Ken “The Microwave” Moore made it:

Holmes scampered for 14 yards as Eastern Michigan desperately tried to get some momentum going.

Wesley found WR Stanley Holmes for 14 yards and TE Cody Wilson for another 12 on 2 straight plays.

Toledo dropped an easy interception of Wesley in the endzone.

Star RB Jason Chambers took a screen pass 8 yards to give Eastern Michigan 4th and 2 from the 5.

Wesley broke a tackle and ran it in for a TD.

A lengthy drive by Toledo ended in a 16 yard strike for a TD from Shippley to WR Anthony Quinn.

Robert Roberto got a huge sack of Wesley on 3rd and long to force Eastern Michigan into another punt.

On the first play of the drive Shippley found Prince Fontana on a 53 yard TD.

Welsey threw an interception on Eastern Michigan’s first play of the 2nd half and it felt like that basically sealed the win for Toledo.

Shippley followed that up with a 49 yard TD to Butt and the game was officially out of hand.

35-7 after the 2 point conversion was successful.

A long, 10 play and 77 yard drive from Eastern Michigan ended with Wesley finding Jason Slater for a 4 yard TD.

Shippley pitched to Bam Bam for an 18 yard TD in a play that Toledo hardly ever runs.

Wesley threw another interception and at this point can someone just sim to the end?

Bam Bam picked up another 23 yards receiving on a quick pass on the move from Shippley.

A 26 yard TD pass to Tony Quinn turned this into something beyond a blowout.

The 2 point conversion for the 50 Burger failed.

Central Michigan WR Bo Harrell picked up a meaningless 34 yard TD on a drive I barely watched … Can you blame me? It was a snooze fest at this point.

A 3 play 46 yard scoring drive for Toledo gave them 55 points on the night.

Another TD drive for Toledo, great.

#1 Texas got upset by #22 Baylor to open up the top spot in the nation for Toledo.

Toledo kicked an onside kick in an attempt to run up the score, and failed to recover.

Toledo did in fact rise to the #1 ranking in the nation.